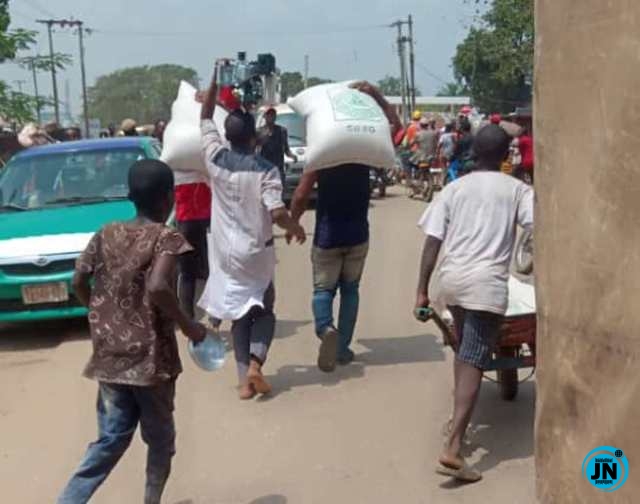 After the hoodlums gained entrance into the warehouse, they looted some COVID-19 palliatives, a resident in the area said.

The looting started as early as 7:45 am, an eyewitness confirmed.

Palliatives carted away included bags of rice and cartons of noodles, cartons of milk, and tinned tomatoes, among others.

Some of the items were taken away on motorcycles.

It was learned that the hoodlums later asked residents in the area to move into the warehouse and pick some palliatives.

One of the residents, Abdulmum’een Idris, said, “The warehouse is being looted at the moment. The hoodlums are asking residents to come and be picking the palliatives.”

Asked if he was sure the items were not provision stored by traders and business people in the warehouse, he said: “The CACOVID stickers are on the bags of semolina.”

According to sources, the items were only brought in on the 12th of October, 2020 by CACOVID but #EndSARS protests were said to have delayed the distribution.

In the same vein, an angry mob has gained entrance into the Federal Capital Territory (FCT) Aluminium market located at Idu industrial layout.

As at the time of filing this report, the situation is still ongoing as there were no security men in sight.

S£x for Marks Scandal: Lecturer Of UNIABUJA Caught Pants Down
Notorious Abuja kidnapper abducted by another kidnapper; pays N1.5m to regain freedom
NDLEA seizes 14.4kg of cocaine at Abuja airport
“We are endangering our lives for a good cause” – Tacha speaks as FCTA bans #EndSARS protest in Abuja