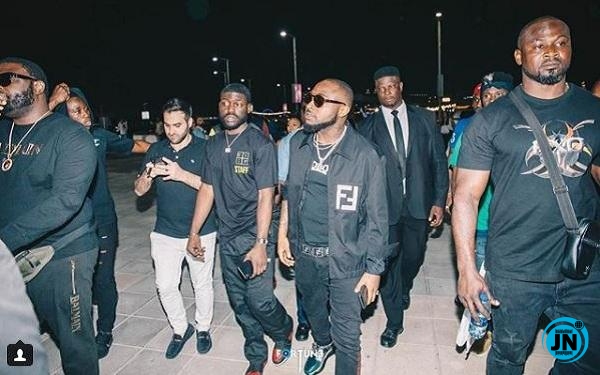 Nigerian Afro-Pop singer, Davido and his crew were allegedly denied access into Bloombar, a popular club in Ghana.

In the video captured on the Instagram page of celebritiesbuzzgh, the ‘FEM’ crooner was seen shouting at the top of his voice as he threatened to buy the entire club.

The DMW Boss was allegedly later spotted after the incident at Oasis Lounge with popular Ghanaian Afropop, dance hall and reggae singer, Stonebwoy.

It was later gathered that Bloombar had some stringent rules regarding who can gain entrance to the club, which was believed that the music star didn’t keep.

“Lori iro this your fake life too much” – Reactions as Bobrisky gifts fan a new Benz amid assault saga
Naira Marley Gifts Veteran Actor, Jude Chukwuka N1million Naira For Correctly Singing His Song Mafo (Video)
Landlord warns lady to stop cooking on his property after finding out that she was giving free food to protesters
See Housemates That Have Been Disqualified In The History Of BBNaija After Erica Escaped It