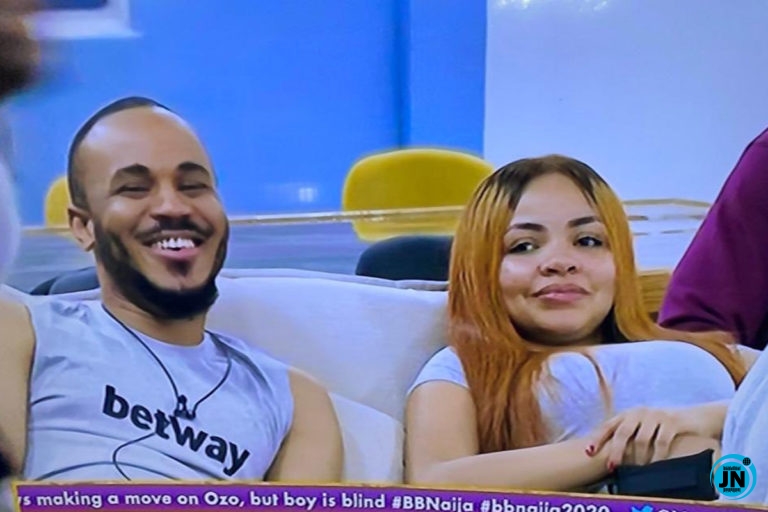 The love and relationship ship between two BBNaija season 5 housemates, Ozo & Nengi seems to have started sailing, as the duo were both spotted in a lovey-dovey situation, where Ozo finally grabbed Nengi’s waist, and kissed her on the shoulder.

Ozo seems to have been closer to Nengi now than before as he has been spotted around her the whole day and throughout their card game around the dinning table.

In was is believed to be the biggest highlight of the day, Nengi was carried on the back of Trikky Tee before she dropped and made her way out.

Before she could reach the door, Ozo grabbed her by the waist and kissed her on the shoulder.

However, the act has sent the internet buzzing, with many of their fans in a frenzy mood.

A twitter user with the handle @Diamond_brights, sharing the video, captioned it;

"Shippers Gada Gada oooo if We Perish We Perish #BBNaija 😅😅😅😅I love to see it".


Shippers Gada Gada oooo if We Perish We Perish #BBNaija 😅😅😅😅I love to see it pic.twitter.com/gZLxhkLw8N

The government of Sokoto recently constructed a Dam, To Encourage Repentant Bandit to go into Farming
Vehicle owners to pay N250,000 to convert their cars to auto-gas – FG
Actor, Yomi Fabiyi leads protest for the release of Baba Ijesha on bail (Video)
Burna Boy: The Rise of an African Giant, A Story of Patience and Perseverance